The Aaronia GPS - Logger includes a total of 6 sensors, all of them on the cutting edge of technology, making it the world's first stand-alone data logger with such a variety of sensors. Not to forget is also the very small form factor and the extremely high data rate of approx. 35 logs/second (freely adjustable). The logger with battery weighs just 88 grams.

The RTSA Suite is multi-platform compatible and available for Windows, MacOS and Linux, thus encompassing all important operating systems. Our easy-to-use tactical display controls and visualizes all integrated components and sensors (RF detector, radar, cameras (PTZ), jammers, etc.). If you turn it on when the device is already powered on, you'll activate the recording mode. The GPS/ Sensor data will be written to the SD card until you turn the logger off. Mini USB Port Connect the device via USB cable with your PC to use the device in streaming mode with our software Micro SD-Card Slot Insert the micro SD card into the slot.

The main purpose of the GPS logger consists of recording the position and even the orientation of the Aaronia antennas (HyperLOG X, HyperLOG EMI or Magnotracker series). The GPS sensor allows for easy collection and documentation of your measurement position , including elevation information.

Even more interesting is the Tilt-sensor and the digital compass, hereby the inclination and orientation of the antenna can be recorded and evaluated during the measurement. This special feature allows you to easily create an 'RF heat map' including frequency , direction and strength of an RF source within 360 degrees.

The Aaronia GPS-Logger offers a very fast update rate of up to 35 complete logs with all sensor data per second (on microSDCard and/or USB-Streaming) offering a 'real time' display of the unit orientation. At maximum rate the Aaronia GPS-Logger will produce around 50MB/hour (uncompressed)! The maximum usable microSD volume is 2GB, offering a maximum recording time of about 2 days at full speed on the
microSD card. The data rate can be adjusted to much lower rates to keep data volume much lower offering long time recording on the microSD card over weeks or even months.

The Aaronia GPS - logger can be used with the internal LiPo battery (standalone) and / or USB (provides unlimited operating time).
The logger has three operating modes :

The Aaronia GPS - logger can be mounted directly on HyperLOG X, Magnotracker and HyperLOG EMI antennas (screws and adapter included). It can also be mounted on any other device , car, etc. with the included adapter. This only requires 2 holes to be drilled to attach the supplied adapter.

The software for our GPS Loggers allow the read-out and display of all data from the different sensors. 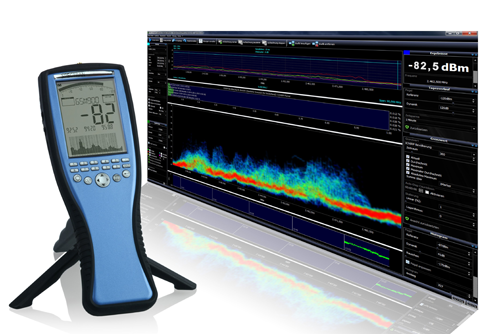